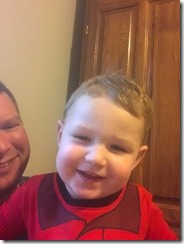 Well, it’s official. Yesterday marked the 2 year anniversary of Danielle and I getting to bring this little boy home and into our house. We never realized how much this guy would change our lives, but he’s been the best thing to happen to both of us since we got married.

In just the past two months, he’s done some amazing things. He stopped using a pacifier on his own. Just started chucking it when going to sleep, and now doesn’t even want one. He’s learned pretty much so all of the alphabet (in order) and can count to ten. He knows a lot of animals (and what sounds they make), loves cars, busses, airplanes, and fire trucks. And knows that each makes a “distinct” noise and loves to imitate them.

He’s finally getting around to putting words together, like “Read, please” and “Eat, please”. He loves brushing his teeth at night, enjoys his bath time (probably because of the bath toy letters and numbers in the tub with him), & walks through the kitchen to his high chair (and can climb into that high chair) without scaring the daylights out of the dogs.

Of course, as always, he’s a toddler, which means he hates being told no. Which means instant meltdown whenever we have to say no. Which we hate to do (don’t most parents?) but know we have to for his safety. And his sleeping habits are somewhat…sporadic, shall we say? Some nights it doesn’t take long to get him to sleep. 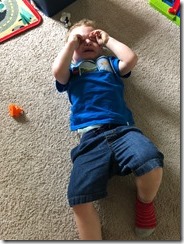 Other nights, I wonder if I’ll even make it to bed for work the next day. Some nights he’ll sleep  all the way through, and others he’s up just a few hours later crying. Then it’s back to his room to calm him down and get him back to sleep. Unless we just don’t want to fight it, then its into mom and dad’s bed for the remainder of the night. And yes, I admit that sometimes that’s really early in the evening but I’m too fog-brained to know what time it is.

I won’t say he a picky eater, but some nights it’s a crapshoot on what he’ll want to eat. Odd to see him turn down some of the dishes he used to not be able to get enough of.

So, if you’ve read this far (come on, it’s not that long of a post!!!), what’s my point? No, none of this is unique or original. I’m going through things so many other parents have gone through and what so many more parents will go through. But it’s fun to document and share some of the things that make being a parent so worth it.