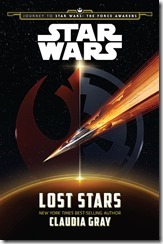 Recently had the opportunity to listen to the audio book “Lost Stars: Journey to The Force Awakens” by Claudia Gray. You can find the book available for download from your local library (probably) and available through most bookstores (Audible, Kindle) and in physical format as well (for all you old school types or those who actually have time to sit and read a book).

Okay, if you know me, you know I’m a die hard Star Wars fan. Not like crazy insane die hard, but I really really like Star Wars. I’ve enjoyed all the movies (not the Christmas special) to some degree or another, am super pumped about seeing the new Solo stand alone, have my office cubicle decorated with Star Wars items, and occasionally speak a word or phrase of Mandalorian.

Which is why I really wanted to like “Lost Stars”. Most everything I’ve read in either the new canon universe or the Legends EU has been gripping, intriguing, exciting, adventurous, and usually just downright fun. Personally, I can’t say the same for “Lost Stars”.

Unfortunately, I should have realized, this is a young adult novel. Our two protagonists, Thane Kyrell (sp?) and Siena Rhee (sp?) are two kids from the recently annexed world of Jelucan (sp?) shortly after the fall of the Old Republic. The story follows their admiration of the Empire, their shared desire to join up, and the events that follow. They are tangentially involved in the main events of the original trilogy movies, being involved with the capture of the Tantative IV, being at the Battle of Yavin,  the Battle of Hoth, chasing the Falcon in the asteroid belt, chasing them down at Bespin, and being involved at the Battle of Endor.

While their actions don’t contribute in significant amounts to the overall storyline we’re all familiar with, their inclusion with those events helped nicely tie the story into the events of the universe. However, this wasn’t a story about that. It was a story about two young kids, idolizing something bigger than themselves, and watching them develop differing views as their lives progress.  Thanks to their involvement/presence at one major event, their outlook and view of the Empire begin to diverge with the obvious outcome of that.

So what did I not really like about this book? From a production standpoint, the narrator’s voice just wasn’t one that I was used to, and it kinda got under my skin a little. There were obvious points in the book where you could tell the dictation was edited together as it wasn’t very clean, and at times it seemed that the pitch and tone of the narrator changed enough to be a distraction, but not enough to stop listening. From a story/plot standpoint, it just didn’t really add much for me to the mythos of the Star Wars universe. It was a prequel novel that focused on some characters that we’ll probably never see or hear of again. And, again, it’s a young adult novel. The childhood friendship turned romantic relationship was just too much trope and a bit too uninspired.

What did I like about the book? Claudia Gray did do a good job of character development with Kyrell and Rhee. Their respective viewpoints on the Empire are well plotted out and developed. The logical progression from children to adults and how they came to view the ruling political forces in the galaxy made sense based on the characters personalities and exposure to critical events in the galaxy around them.

So, overall, is it a good book? Yes, it is a well written book with good characters. Are they super compelling, no. Does it essentially add to the SW universe? IMHO, no. Is it worth reading? If you’re a fan of young adult novels, sure. If you’re a fan of Star Wars, possibly. If you like both, then it’s definitely for you. Can SW fans survive without ever reading this one? Yes.

And those are my random thoughts on it.