Netflix has been bringing up a lot of original content recently, from series like the Marvel’s superhero shows (Daredevil and Jessica Jones) and re-imaginged 80’s cartoons (Voltron Legendary Defender) to original movies (for good or bad The Cloverfield Paradox and Bright). Rumor has it that within a few year Netflix is looking to provide subscribers with 50% original content, moving away from the rental model they currently use. 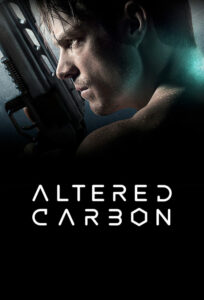 This presents some good and some bad offerings for us subscribers. “Altered Carbon” is one of the few shows that I’ve caught on Netflix that falls in a gray area inbetween good and bad. I’m going to take a brief look at “Altered Carbon”, tell you what I like and what I hate about it, and if I can recommend you watch it.

The synopsis from IMDB.com reads: “Set in a future where consciousness is digitized and stored, a prisoner returns to life in a new body and must solve a mind-bending murder to win his freedom.” A slightly more in-depth viewer written review reads: “ALTERED CARBON is set in a future where consciousness is digitized and stored in cortical stacks implanted in the spine, allowing humans to survive physical death by having their memories and consciousness “re-sleeved” into new bodies. The story follows specially trained “Envoy” soldier Takeshi Kovacs, who is downloaded from an off-world prison and into the body of a disgraced cop at the behest of Laurens Bancroft, a highly influential aristocrat. Bancroft was killed, and the last automatic backup of his stack was made hours before his death, leaving him with no memory of who killed him and why. While police ruled it a suicide, Bancroft is convinced he was murdered and wants Kovacs to find out the truth.”

Alright, I’m going to start with whether or not I can recommend you watch this series. And I REALLY REALLY want to say yes, watch this. But in good conscience, I just can’t.

There’s a lot about this series that I like, and it raises some really good questions to think about, but there’s enough in it that will just prevent a lot of people from wanting to watch it. I just listened to Paeter’s most recent podcast, and his comments on “The Shape of Water” is a good indicator as to why at least he wouldn’t like it.

Okay, so why can’t I recommend it? That falls into the reasons as to what I didn’t like about this series.   One, this series is very bloody, and very violent. Gun play, blood splatter, and fisticuffs are pervasive through out the episodes. If you’ve seen Marvel’s The Punisher from Netflix, it’s about that bad. I do intend on reviewing that one soon as well. I can live with the bloody violence, to a point. In the world setting (think Blade Runner inspired world setting), the violence is understandable. But for some, it’s probably way over the top and a series turn off. Two, language. I remember trying to watch Liam Neeson’s “The Grey” with my wife awhile back. We turned it off because of all the f-bombs in the first 15-20 minutes. Altered Carbon is perhaps not quite as bad, but still peppered heavily with course language. I did try to keep in mind the world that was built and the society that was presented, and kept it in an “artistic” light, but it’s still more than I prefer. And thirdly, sex and nudity. Netflix really pushed the limits with this series on both of those. I’m fairly sure that there wasn’t a single episode that didn’t include one or the other in it. As a matter of fact, the ultimate impetus for the protagonists purpose is essentially the solving of a sex-related crime. I’d say Altered Carbon pushed the boundries of soft porn in some scenes, I found myself, like Paeter watching “Shape of Water” averting my eyes as many times as I could and trying to listen to when the scenes changed before looking back. Now, that being said, I again look at the world that we are presented, and some of the implications that “immortality” brings up, and the sexual nature of the series is apparent, and also an interesting talking point.

So, what is there about this show to actually like? The world is extremely well thought out. I thought I’d read somewhere that this was based of a book/novel series, but I can’t find that, so I’m not 100% sure that’s accurate. If anyone finds confirmation one way or the other on that, please let me know. This is a cyberpunk-styled show, with heavy influences (in my opinion) from Blade Runner. It’s set nearly 500 years I the future, and the tech is very believable. There’s references to the settled worlds, indicating that mankind has spread out to the stars.  But while it helps develop the setting, its’ not a tech we see used a lot. There are flashbacks to events on other worlds, but again, they don’t spend a lot of time going into the hows of the tech, just that it exists and we move on. Even the explanation of the DHF (Digital Human Freight) and the cortical stacks is handled briefly in the first few minutes of the pilot episode. But it’s done so well that you accept it as part of the world and move on as if it’s perfectly normal.

The acting is solid all around. Main characters to supporting cast all bring their A-game to the show. There are only a few faces that I recognized in the series. James Purefoy (most recognizable from Knights Tale and Resident Evil) plays Lauren’s Bancroft, Hiro Kanagawa (iZombie, Heroes Reborn, Man in the High Castle) plays the police captain, and Dichen Lachman (Agents of SHIELD, The Last Ship, Dollhouse) plays Reilynn, the protagonist’s sister. Their faces are familiar even if their names aren’t. But everyone does a solid job with a well written script.

But what I really liked about this show is the basis behind it, and some of the very interesting questions is brings up. The first question is related to something that’s said in the first few minutes of the show. You are not your body. As Christians, we believe that we aren’t defined by our physical bodies. Our spirit that God created is what inhabits these bodies. Of course, when we die, our spirit lives on, deeming entrance to either Heaven or Hell, depending on our relationship with Christ. Altered Carbon takes the”soul/spirit” and reduces it to a portable hard drive. In that world, real death only happens if the stack is destroyed. They have a “religious” sect called Neo-Cs (new Christians?) that can have their DHFs coded as such that when their bodies die, they don’t get spun back up or re-sleeved (essentially dead). But for anyone else, they can just be re-sleeved and go on living. The longest lived people are called Meths (Methusalas) and back themselves up every few days. Which leads to the question of immortality. If the body is basically disposable, and we can be backed up (meaning even if a stack is destroyed the DHF can be downloaded into a new stack and re-sleeved into a clone), then what value does life actually have?  Over such a long lifetime, what kind of vices can a person get away with and still be considered normal?  But the really big question that the show made me think about is, what is the soul? Is it possible to just download my thoughts, experiences, and consciousness into a hard drive and move me from body to body? Or is there more to a person than the electrical impulses firing in our nervous system? Personally, while it’s an interesting concept, I really don’t think I’d want to live in a world where that could be possible. I think there’s more to me than my electrical patterns being copy/pasted from a wetware (my body) to a hardware (stack) and back into a different wetware. As a Christian, my soul is tied to my body, and when it goes, that’s it for me. I’m off to Heaven.

Well, those are my thoughts on Netflix’s original series Altered Carbon. Will I catch a season 2 if it comes out? Possibly probably. Again, can I recommend that you go out and watch it? I’ll leave that choice up to you. Just be warned about what I have said is in it. If you think you can get past the visual and auditory assault and watch it for yourself to see some of the ideas that they present, go for it. You’ve been warned.