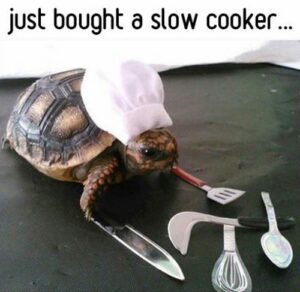 Last night while having dinner, I was watching my wife feed our son, and enjoying the slow cooker chicken and dumplings meal she’d started earlier that morning. (Now the picture makes a little more sense, doesn’t it?) It’s funny to see what he’d eat. His own plate of c&d, green beans, and applesauce. And the only thing he’d eat from his plate was the applesauce.

Both Danielle and I tried to feed him c&d from his plate, and he wasn’t having any of it. Then Danielle decided to feed him a few bites of the EXACT SAME THING from her plate, and he gobbled it right up. not sure why, but apparently diner tasted better from momma’s plate than his own. and the night before, Danielle fixed a homemade teriyaki chicken fried rice dish. After eating his own plate of applesauce and pasta with tomato sauce, he then proceeded to gobble down half of my bowl of fried rice.

I also realized as I was eating that c&d was never on my list of favorite dinners when I was growing up. Mind you, I ate it, and I’m not tying to denigrate my mom’s cooking. She was an awesome cook, and fed us well. i just never liked c&d. Well, I liked the chicken, just not the dumplings. Might  have to do with the dumplings she used (I’m pretty sure it was drop biscuit dumplings, not the canned Bisquick Danielle’s recipe called for).

Now, it’s one of my favorite dishes. Danielle can make it on a regular basis as far as I’m concerned. Of course, I realize that as a kid I missed out on a lot of wonderful food that I just didn’t like back then. Brussel sprouts, dressing/stuffing, raw carrots, zucchini, yellow squash, broccoli, cauliflower, pineapple, coleslaw, & sweet potatoes, just to name a few. Okay, let me clarify one thing, I like baked sweet potatoes, still not so much on sweet potato casserole. Generally just a little too sweet for my tastes.

I’m hoping as he gets older that Levi will enjoy a wider variety of foods than I did when I was a kid. i really don’t want him missing out on the wonderful tastes that are out there. (So far he seems to enjoy some oriental dishes, my favorite cuisine. There’s definitely hope for the little man’s taste buds.)