In the wake of the FL shooting recently, what I’m about to say may be either angering, upsetting, or offensive. It’s not meant to be any of that. Just some stray thoughts. This is from a Facebook comment thread I have going on right now. 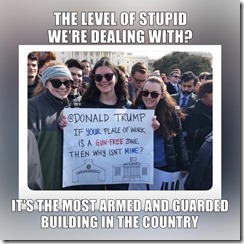 I’m not saying these kids don’t have the right to protest. Using the kids in the image above, there’s certainly an optic of uninformed about them. there’s also a hypocrisy right now about all of this.

When are “kids” considered “adults”? We can drive at 16, but can’t do much more legally. At 18, we can vote, and smoke, and serve in the military. but it’s not until we are 21 that we can drink alcohol (adult beverages) and now in may places buy firearms. So, when are they adults?

I also dislike the idea that this was considered a “protest”. no one protests the daily murder rates in Chicago (strictest gun control policies in the US). No one protests the daily number of babies killed by PP. And no one can consider it a “protest” when the governing body (the school boards and administrations) are supporting it. It’s no longer a “protest”, it’s a rally. And the way I see it, it’s a rally for gun confiscation. Why? Because the call right now if to ban semi-automatic guns. That’s virtually EVERY firearm currently made, rifle or handgun.

Making gun purchase/ownership that more difficult is wrong. My right to purchase a firearm for sport (target shooting), provisions (hunting), or defense is not subject to someone elses hurt feelings (unless I’ve done direct harm to them). It’s a Constitutionally guaranteed right. Which should be subjected to any known mental health considerations or criminal history when purchased from a FFL dealer.

These kids want to really make a statement? Call for more funding and training on mental health awareness. Learn to watch out for those signs and mention them (although when they are noticed, as in the FL case, they aren’t always acted on by our wonderful federal agencies and LEOs). Stop the bullying, the shaming, the isolation of those that are different.