Well, it’s been a bit since I had a chance to write down (type out?) some thoughts. Have a few running around my head, so it’s time to get them out and clear out drive space.

Let’s start with a few of the good things: 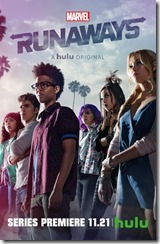 Hulu has produced an original series based on the Marvel comic series Runaways. Now, I’m not personally familiar with the source material (seems to happen with several Marvel’s TV productions). However, watching this series as a standalone has been worth it.

Okay, so it’s a teen drama, filled with teen angst like social peer pressures, dealing with parental authority, sexuality, learning your parents are super-villains, you know, the usual. While not spectacular acting, it is solid acting. A few familiar faces star in the show (all adults), but even the first timers do a solid job.  Story line is a little on the vague side through the series, and it’s tough to discern what the goal of PRIDE is all about. It’s a small sticking point, but doesn’t ruin the series. I admit it, I got caught up on the first 8 episodes once I realized it was out, then caught the last episodes of the season on the day they dropped. The entire first season is now available, so it’s worth binging if you decide to give it a try. 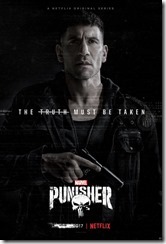 Netflix dropped their latest Marvel series, The Punisher, not too long ago. I finally got a chance to get into that as well (thanks mid-season network breaks!). I’m a little conflicted commenting on this series. I want to recommend it, but there’s a lot that can turn people off.  The Punisher I am familiar with. Jon Bernthal (The Walking Dead) portrays Frank Castle, and does a fantastic job. He gives probably the best visualization of Castle so far (sorry Thomas Jane, not sorry Dolph). Good story line, gripping actually. However, it’s The Punisher. It’s bloody. It’s violent. It’s a little on the gratuitous side. There were scenes in this show that made me cringe in horrific imagined pain (anyone up for having your face slid down a broken mirror? No? Didn’t think so). This is most certainly not a show for kids/the young or those lacking intestinal fortitude. But, if you think you can handle it, check it out.

Sci Fi Channel (yeah, I know. I used the old spelling) debuted a new series back in 2015 called “The Expanse”. The television series is based off the book series  by James Corey. Season 1 is based on the first half of the book “Leviathan Awakes”, while Season 2 follows the course of the second half of that book and the first half of book two “Caliban’s War”. There are a few things different in the show than the book (namely introduction of some characters early than in the books), but over all this is, IMHO, the most faithful adaptation of a book into a visual medium that I have ever seen/heard (yeah, I listened to the novels I audio format). Again, as with the other two shows that I’ve commented on above, very solid acting from every principal and secondary cast member in this production. This has a gripping storyline from start to current standing. If Season Three (to debut in 2018) follows the same kind of production (and stays with the second half of the book Caliban’s War), I’m waiting on pins and needles for it’s return to the screen.

One of the main things I love about the series is that it uses basic physics in the storytelling. Ships don’t move at light speed/hyperspace/quantum drive/etc. They use a drive that has it’s acceleration limitations. Spacial acceleration has it’s effects (usually negative at high thrust) on objects and people. Ships get a hull puncture, they lose pressure, and have to be patched, no force fields. There’s lag time in communications between distant locations, no instant conversations between planets or ships. While there’s an obvious science fiction element about this series, there’s enough science being used and utilize to ground it into a very believable vision of the future. The books do have a lot more language in it than the series does (f-bombs aplenty), so if that turns you off, don’t bother. But if you can get past that, read the book/listen to it in audio format. Or catch the tv series.

Okay, time for some of the bad….

Recently, Oprah Winfrey has become a media darling again for a rather impassionate speech she gave at the 2018 Golden Globe Awards ceremony. Immediately after that, media outlets left and right (not ideologically left or right, left and right as in aplenty, lots of, nearly all of them) began touting that it was a “presidential” speech and there began the whispers of leading to calls for Oprah to run for president in 2020.

Okay, why do I not want Oprah to run for president in 2020? Let’s break this down real simply. Our current administration is run by a politically inexperienced billionaire television personality that half the country passionately hates and the other half practically adores (there’s a few of us in the middle that just deal with it for now). And now, suddenly certain people (for the most part the ones that passionately hate our current president) want to replace him with another politically inexperienced billionaire television personality that half the country can’t stand and half the country swoons over. Let that sink in for a moment.

Here’s a few more thoughts on this topic. 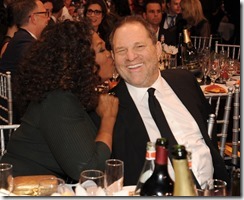 Need I say more? Her speech was about the rampant sexual misconduct within the Hollywood environment. An environment she’s been a part of for how long? And here she is, sitting next to and kissing the cheek of the man that’s the poster boy for everything that’s wrong with Hollywood.  A man that supposedly everyone knew was engaging in sexual misconduct but no one did anything about!!

So, why would I consider voting for her? Here’s are some reasons that, Heaven help us, Oprah perhaps did decide to run and actually become the Democratic nominee; her policy stance on nation defense, border security, foreign relations, international and domestic terrorism, domestic economic policy, abortion, the second amendment, and probably some others that I can’t think of off the top of my head.

However, there’s no expression on any of these issues that I find important. None that I’m aware of, at least. So all the talk and speculation of her running for president in 2020 is just that, speculation. I’d back her or not based solely on the stance she takes on the issues that matter to me. Until then, I REALLY don’t want to think about it. I still think someone with real political experience would be better (from all parties – R, D, L, I).

Alright. I’ve finally gotten the pent up thoughts out of my head now. I think I can rest. Wait, no, I can’t. I have to start preparing for the upcoming snowpocolypse this weekend. Ice, snow, possible power outages. Yippie!!! I’ll believe it when I see it.