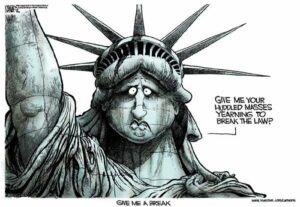 May break my bones, but names will never hurt me.  I grew up hearing that all the time.  It was a great thought to help me get over the name calling and bullying I endured.  And yeah, I wasn’t the popular kid in school, so I did get called names.  Not often, but enough.  But I got over it, I developed a tough skin.  I didn’t take offense and I moved on.

However, I’m gonna have to say, when the term actually fits the circumstance, how in the bloody blue blazes is it dehumanizing?  Yes, there are certain terms that should not be used and absolutely should be dropped from our modern lexicon.  But in the case I’m including in the link below, the phrase is absolutely appropriate.

And for reference, the term I’m talking about is “illegal alien”.  Do you have the appropriate immigration documentation to be in the United States?  No?  Guess what?  That’s against our laws, aka “illegal”.  Are you a US born citizen or a appropriately naturalized United States Citizen?  No?  Guess what?  You’re an alien in this country.  And despite what is said in the article, not everyone equates “alien” with extraterrestrial.

Here’s the article.  Sorry, tired of the bleeding heart “let’s worry about people’s feelings and not focus on the fact that they have broken our laws” demographic.

When a student-led organization at Dartmouth College petitioned the Library of Congress in 2014 to drop the term “illegal aliens” and instead use “undocumented,” the response was no.

The reasoning, members of the group recall, was that “illegal alien” is an official U.S. government term for people who are in the country without proper documents.

But the Dartmouth Coalition for Immigration Reform, Equality and DREAMers, or CoFIRED,  motivated others – including librarian associations – across the nation to press the Library of Congress to stop using the term, which they argued dehumanizes undocumented immigrants.

The Library of Congress listened, and has decided to no longer use the heading “illegal aliens” in bibliographic records.

“When we got the news we were very happy and excited,” said Oscar R. Cornejo Casares, a junior majoring in sociology, in an interview with Fox News Latino.

Cornejo said that the Library of Congress’ decision was the result of the collaborative effort of Dartmouth as well as librarian organizations and others.

“We were surprised to see this was happening,” he said of all the support nationwide for the effort that CoFIRED launched. “Illegal aliens is a dehumanizing, racially charged term. It’s about changing how we talk about things. The word alien makes undocumented people seem far removed…extraterrestrial.”

The word alien has been targeted at the state level, such as in California, where last year Gov. Jerry Brown signed a measure removing the term from the state’s labor code.

Also last year, Rep. Joaquin Castro, a Texas Democrat, introduced legislation to remove the term – which has been used in U.S. documents since the Naturalization Act of 1790 – from official U.S. regulations, laws, and documents, among other things.

Among the modifications sought by the measure, called the CHANGE Act, are replacing the term alien with “foreign national,” striking “illegal alien” from federal law and replacing it with “undocumented foreign national,” and ensuring that all executive branch agencies stop using alien and illegal alien “in signage and literature.”

The U.S. government uses the term alien to refer to a person who is not a citizen or national of the United States.

The Associated Press contributed to this report.

Elizabeth Llorente can be reached at elizabeth.llorente@foxnewslatino.com. Follow her on https://twitter.com/Liz_Llorente