Lot of thoughts been running around my head this week, so figure it’s time to get them out of there and free up some disk space.

Starting off things I like this week is a recent special from The CW. Monday and Tuesday debuted it’s “crossover” episodes for the season. I put crossover in quote marks simply because I think that’s a misnomer.

When I think of a crossover between series, I usually expect one or two minor (possibly a major) character making an appearance and playing a pivotal role in the storyline. This seasons crossover, IMHO, broke that by having major characters from 4 series appearing in all four episodes of the crossover. Which to me, made this a 4 part miniseries. Heck, even the opening for all 4 episodes was consistent instead of each series unique show opening.

So CW premiered “Crisis on Earth-X” this week. While I’m not familiar with the source material comic books, I will say this four part mini-series was an amazing production. Quick story synopsis: Barry Allen (The Flash) and Iris West are getting married. As usual and expected, all of their super-hero friends are invited. During the nuptials, the group is assaulted by an army of Nazi’s, supported by some strangely familiar looking super-villains. Villainy and kick butt fight sequences ensue.

The show writers kept a good pace between exposition and action going through all four parts. I think only one or two times did it seem to drag just a little, but those were made up for shortly thereafter with well placed and well paced action. The acting from all the principals was up to their normal standards, with a few getting a good opportunity to not only play their normal characters, but the evil versions of themselves. There were some good one liners and moments of well placed humor, specifically the one scene in which SuperGirl and Flash arrive at a location, then awkwardly stand and wait for Green Arrow to show up on his motorcycle. Steven Amell makes a snide remark, and it brings a good chuckle to the moment.  Also, two main characters make a rather interesting reference; to Marvel’s Spiderman. Still not sure how they got away with that, but it’s interesting to hear in the course of the show.

We are introduced to a new Earth-1 metahuman (superhero) who’s apparently been living for some time on Earth-X. We are also re-introduced to the Earth-X variant of a deceased Earth-1 villain/anti-hero. And while I expected the Earth-1 hero to stay, he returned to Earth-X, while the Earth-X character opted to stay on Earth-1. We also see the death of one of the main players from one of the series (no spoilers here). Which is kind of why I was surprised that the new Earth-1 hero we meet opted to return to Earth-X. Seemed like a logical replacement for the character, but nope.

There’s a few things that are done questionably in the series and writing; specifically in part 4 why does the very large army of Nazi’s carrying fully automatic rifles bother to march directly into hand to hand range with the assembled superheroes before beginning to attack? My one serious gripe about the mini series is a change to the Earth-X character that decided to stick around. They’ve changed (or actually addressed?) the characters sexuality. They are now (or always was?) a member of the same-sex community. While I have no real problem with this (since they can do with the character as they wish), my problem stems from the fact that he (slight spoiler) is no longer quite the tough as nails anti-hero/villain as the original Earth-1 version. Instead of the stand-offish, brooding, cold character he was, the new version is all huggy, law-abiding (“You can’t just go around frying people!”), let’s talk about feelings. I may grow to like the interpretation now in play, but that depends on how long he sticks around. We’ll just have to see through the course of the seasons.

Overall, if you enjoy “Supergirl”, “The Flash”, “DCS Legends of Tomorrow” and “Arrow” on CW, and didn’t get a chance to catch this mini-series, I recommend it. I don’t think you need to be a fan of all four series to still enjoy this mini-series crossover. And if you like alternate history Earth stories (a la “Man in the High Castle” – also a highly recommended series on Amazon Prime), you would probably enjoy the envisioning of Earth-X in this mini-series.

Here’s a guy with some fun stuff to say and talk about. If you don’t recognize him, he’s Chad Prather (@WatchChad), aka the Political Cowboy. He has a new weekly podcast on Apple Podcast and Podcast 1 called, the Chad Prather Show. While he’s done some “political” posts on social media, I like to describe his posts as more “common sense with a heavy dose of truth”. His podcast is just a sit down interview with interesting people, no real politics involved. Just a good time getting to know interesting people. So far he’s sat down with Tomi Lahren, youtuber sensation an0maly, and former Dave Letterman writer who goes by the social media name NotKennyRogers. All good conversations, so I recommend checking out his podcast. 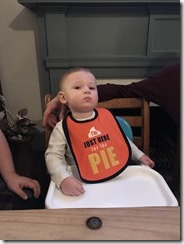 This guy. ‘nuff said. His first real Thanksgiving was a hit.

And now for some things I hate…

These guys: Harvey Weinstein, Matt Lauer, Roy Moore, Rep Conyers, Al Franken, Bill Clinton, Donald Trump (do we see where I’m going with this list?), et al. And by hate, I don’t mean that I hate these people specifically. I don’t know them personally, I have no basis for an opinion on whether I like or hate them (and as a Christian, I shouldn’t actually hate anyone at all, that’s not what Jesus taught us to do).

What I hate is their poor choices in their treatment (or alleged in some cases) of women. I really can’t say more than what’s already been said, but here’s what I will say. Don’t be a shab-buirla sheb (and yes, that was a very impolite insult). Women should be treated with respect, not because they are weaker than men, but because they are complimentary to men. They were designed by God (yes, this is what I believe) in a very specific manner. They came from a man’s side, not so that they could be placed in front of to take dominance, and not so that they could be placed behind as subordinate. From his SIDE, to walk beside him, so that both man and woman could walk together, side by side, completing each other. God also formed her from man’s rib, from under his arm, so that man would put his arm around the woman and protect her.

I won’t go on more than that, simply because doing so makes my blood boil, and I really want to calm down.

Well that’s it for this week.