Yesterday morning, I was flipping channels in the morning and came across DragonBall Z Kai on CW.  I’d watched DragonBall Z during it’s run on Cartoon Network, and enjoyed the show.  There’s always been one episode that stuck out to me because of the way it was animated and the final single image of the episode, which was very well drawn.  But the idea and underlying philosophy behind the scene has stuck with me for years.

Here’s the set up: Goku, the worlds greatest fighter (and defender) has been killed (don’t worry, he can still talk to the living).  His son, Gohan, is fighting one on one against the most dangerous evil the world as seen to date; the super being known as Cell.  Cell’s goal is destroy all human life on Earth, and if he wins “The World Games”, he will get to annihilate humanity.

The fight between Gohan and Cell has been long, brutal, and bloody.  Cell has beaten Gohan down, worn him out, and seems to have no end to his ability.  Gohan is worn, tired, exhausted, and suffering from a broken and useless arm.  His most awesome and devastating attack, the kamehameha attack is all he has left.  But it requires both arms/hands to complete.  And Gohan is down one.

Goku appears as a spirit to encourage Gohan, and to help him.  Gohan knows he can’t defeat Cell alone, and seeks the help of his father.  Together, father and son complete the kamehameha attack, and the scene ends in an image almost like this one (I’m not 100% certain this is the actual image from the end of the episode, but it’s so kriffin close!); 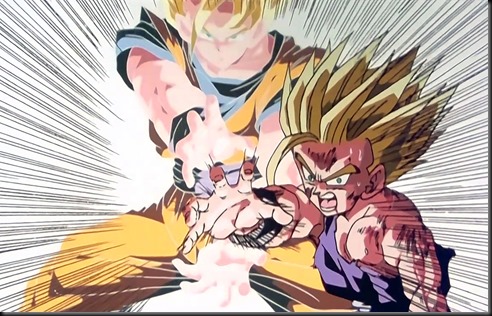 I’ve always enjoyed this image.  The idea of a father, standing behind his son in a desperate time of need, lending his support, his power, his (in this case) own helping hand when asked is amazing.  How much like our Heavenly Father does this image display?  But I also think it’s awesome because of the way Gohan and Goku are depicted.  The looks they are drawn with; the fierce determination, the defiance against Cell and his agenda, the visual statement of “You will not win!”

How many of us are beaten down, broken, and unable to fight against the terrible threat that faces each of us (sin, Satan)?  How great is it to know that when we call on our Heavenly Father, not only does He hear us, but He will be there, standing behind us, lending us His helping hand and loaning us His power to defeat the enemy.  But it also means that we have to recognize that we can’t win on our own.  As strong as we may think we are, we will never beat sin without the help and support of our Heavenly Father.  And with Him behind us, we can stare at sin with the same look that Gohan and Goku have; fiercely determined to be defiant and say to sin, “You will not win!”