Well, I’ve been trying to figure out what I can write about.  Life doesn’t seen to have been too interesting enough to really post anything.  Well, nothing that wouldn’t start a firestorm of talk that I just don’t want to deal with right now.

But today I think I have something to write about. Today I have achieved a personal best. 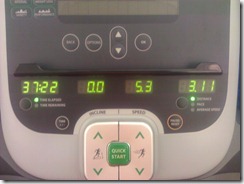 Back in high school (and let’s not talk about how many years ago that was), I had to run (every other week I think it was) a mile for our gym class.  I was pathetic.  I MIGHT have been able to walk it in 15 minutes.

Since then, I haven’t given the idea of running much thought.  Until recently.  A few years ago, my sister and I walked the Evansville Half Marathon.  Well, we would have but Diana wasn’t able to do the walk with me.  But I did do it with a friend of mine from church (thanks, Leah!) and another walker whom we met on the walk.  It was fun, and got me to do the Flying Pig marathon a few months later.

After that, I decided I wanted to actually try and run a half marathon.  Quite a stretch from walking to running.  I guess I should mention that I haven’t been doing a lot of walking in the past few months.

There’s a second reason, and probably more important reason, for wanting to take up running.  My health.  Danielle and I have both decided we want to get fit.  She’s working with a personal trainer, and I’ve taken up running.

It’s bee a long journey to this point, but so far it’s worth it.  Some time back (before I got married), I started Weight Watchers.  I started the program at about 218 lbs.  Today (holidays and a wedding since then), I weigh 180 lbs.  My goal is somewhere in the 170s, so I’ve still got a ways to go.

But back to the running.  I decided I would start by just getting on a tread mill and running until I tired out.  I started out being only able to do less than 1/4 miles. I remember the first day I was able to run for 10 solid minutes.  That wasn’t a full mile, but it was the longest I’d run in forever.  The next day, I remember going back and running until I actually hit that 1 mile mark.

Since then, it’s been a push but it’s been steady.  Some days haven’t been as good as others.  And there’s a definite difference between a tready and being outside.  But the endurance is building.

As a march to my goal of running a full half (is that an oxymoron?), I need to be able to run a 5K (translated to 3.1 miles for us non-metric users).  Biggest problem I’ve had on a treadmill is the display, reminding me of my distance and time.  Funny, but as I think on it, listening to the time/distance announcements on my GPS is a bit of a stumbling block.  So I’ve found I feel better and do better when I cover the display and don’t worry about what it shows.

I think that’s part of a runner’s high.  Just zoning out and going until the body says stop?  Three days ago, my goal was 2 miles.  Two days ago it was 2.2.  Yesterday’s was 2.5.  Today’s was skip setting a time or distance goal and just run until I got tired.  Okay, in truth it was run through an entire episode of the animated Green Lantern and get at least part way into Young Justice.

Mission accomplished.  I eventually looked down and realized that during GL, I had gone 2.75 miles.  So I said I’ll just keep going, I can reach that 3.1 today.  And I did.  Strangely, I think I could have kept going, maybe even reaching 4 miles.   I’ll save that for tomorrow!

So today was a great personal achievement for me.  3.1 miles is the farthest, longest I’ve ever run, but certainly won’t be holding that record for long.