To the current administration;

We don’t believe you.

Respectfully, Secretary Chu, No.  You do not get an A or better as a grade for your performance to keep our gas prices down. 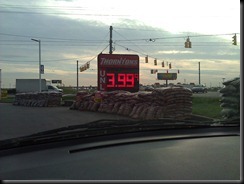 I think this says it all, and this isn’t even the worst in the country.

Let me just say, I have a small car.  I got one that got better gas mileage than the one I had so I could save money.  But the policies of you and the current administration have basically negated that objective. 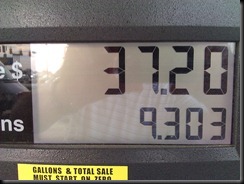 (I’d embed that, but there’s something screwy that won’t allow it).

The problem, Mr. President, is that you are not telling us the truth.  Obfuscating facts is wrong, no matter who is doing the obfuscating.  It’s already been proven that the increase in oil production you mention is happening on PRIVATE land, not government land.  Your policies are making it impossible to access the massive oil reserves we have on the continental shelf and on government lands such as ANWAR.

You also can not claim to be “fast tracking” the southern part of the Keystone pipeline because it doesn’t require your input!  And Keystone has already said that it was approved for them to build that part.

Next, you want to approve a southern portion of the pipeline w/o the northern part.  So that it reduces a glut in Oklahoma.  That’s fine.  But that isn’t bringing new oil in from the north!  In your house, you can’t install a faucet in a sink with a drain and not have pipes from the source to bring the water in!

We’ve also busted the myth that we have only 2% (90 billion barrels) of the world’s oil reserve.  That’s fuzzy speak, Mr. President.  We may have 2% of the worlds “proven” oil reserve, but the USGS says there’s almost 3 trillion (?) barrels ready to be found, tapped, and used.  But current policies are preventing anyone from accessing it.

I know you want a green/renewable energy policy, and I can’t fault you for that.  I think it’s a noble and worthy goal.  But the technology isn’t in place yet.  It’s not viable, and it’s not affordable.  You can’t just stop fossil fuel production and use w/o the infrastructure for the renewable energy being able to take over.  If it’s not there (hint: it isn’t), you can’t use it.

Let the market and customer demand drive the economy.  Stay out of it.